Hiya everyone! In honor of all the new yummy food on Pixar Pier, I’ve written a review with some of my favorites and least favorites. So read on to discover all the drool worthy food over on the pier!

When Disney announced the opening of Pixar Pier, all of us Disney foodies knew that the new pier would come with new snacks! As excited as I was to see the transformation of the pier into a Pixar paradise, I was a little more excited for the superabundance of new foods that came with it. From beginning to end, the pier is filled with more food than attractions. My second (Disney) stomach began to grumble when I heard about angry dogs, Senor Buzz churros, Bing Bong’s sweet stuff, chicken wings at the Poultry Palace, giant num num cookies! It had most of us yelling “SHUT UP AND TAKE MY MONEY!” and take my money they did. 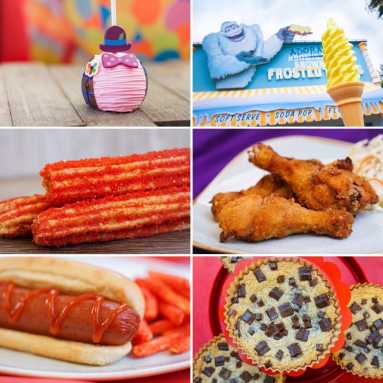 While visiting Pixar Pier I was able to squeeze in a few of the new treats with some of my old favorites without having to have someone roll me back down the pier. Let me tell you this was some of the best food at California adventure this time around, some of it not only adorably grammable, but irresistibly delicious. The first thing I ogled was the Adorable Snowman Frosted Treats, but sadly it was 100 degrees outside and the line was about 45 minutes long so we opted to use that time to ride the Incredicoaster (amazing btw) instead. After helping catch baby Jack-Jack we stopped by the Cookie Num Num stand, whose line was also, sadly, very long so we moved on. Finding ourselves just a little irate that neither one of our plans fanned out, we headed on over to Angry Dogs to try their signature spicy dog!

Not being a huge fan of hot dogs myself, I didn’t enjoy it as much as I wanted to. To me, it wasn’t very spicy at all and really tasted no different than the regular hot dogs they previously had in their place. However, I got completely opposite reviews from my in-laws and my wife, who actually thought it was a cute and tasty idea. I did enjoy the bag of “hot fries” that came with it and the huge selection of ketchup, who knew there could even be so many options for one condiment, as well as the atmosphere and theme of the stand.

Later that night we ventured into Bing Bong’s Sweet Stuff, where I picked up a bag of Buzz Lightyear sour apple belts and we tried a Memory Refresher. The sour apple belts really came in handy when we waited in line for rides and even lasted me a few days, results may vary if you have small children with you. We chose the Gloomy Blues memory refresher which had a base of blueberry bobas and was topped with blue raspberry slush since we were still feeling a little down about not getting that cookie num num. The joykiller I am, not to be taken literally, it wasn’t something I enjoyed either. It may have been since it was sweltering outside that day or just because slushies are literal slush but I felt it tasted watered down and bland. Even my blueberry bobas were more bobas and less blueberry. I’ve read raving reviews about the Rainbow Unicorn and Slow Burn slush though, so next time I’ll be ready to try both!

Update: Since revisiting Pixar Pier and trying the rest of the flavors of slushes we have decided that they are, in fact, yummy and we will be getting at least two every time we visit 😀 We highly recommend the Rainbow Unicorn and the Slow Burn, but definitely the Unicorn for first timers!!!

To end on a sweeter note, our final stop at Senor Buzz Churros was not a disappointment. I mean, Disney does make the best churros in the galaxy. Am I right or am I right? It’s definitely one of my own Disneyland food must haves! We stopped by and tried both the Cinnamon Sugar Galaxy churro and the Caliente churro. Since I tend to believe everything I read on the internet, I expected the Caliente to be Flamin’ Hot Cheeto dust. Alas, it was more of a cinnamon like Red Hots candies, but it was still quite enjoyable.

Getting your full experience while visiting the Disney Parks includes trying as many of the sweets and treats as you can possibly handle. After all, us Disneyaholics are practically made of Disney snacks, are we not?

Written by Bonnie Reece, author of The Honest Millennial, thehonestmillennial574606524.wordpress.com